September 17, 2019
Much has been written about gifted and high IQ people and to a large extent, the focus has been on their cognition, for obvious reasons. I have a gifted son and as many parents of gifted children can attest, these kids can be quite challenging for any parent: from daily chores, such as buckling up the kiddo in a car seat to the point when he or she fails in conventional schools.
While cognitive psychology has been a passion of mine since my early years at university, there comes a point when you can’t explain giftedness in cognitive terms anymore. For example, when your kid prefers to cry for an hour over some simple piece of homework he could easily do in a matter of a few minutes and threatens you to run away from home. Why would an eight-year-old child say "I wish I were never born"? Such behaviour would leave any parent just puzzled and perplexed. What is the biological foundation of such seemingly irrational behaviour?

Here are some traits gifted kids typically display, that have little to do with cognition:
In order to make sense of these diverse behaviors and traits, I delved into personality psychology. The one personality trait that correlates with high IQ is “Openness to experience”, which in turn correlates with the (controversial) trait N (iNtuitive) in Myers-Briggs, first described by the Swiss psychologist Carl Gustav Jung.
Giftedness and trait N are highly correlated, as you can see from the following statistics:

From Myers-Briggs studies some of the above traits can be accounted for:  Ns tend to be very creative (cognitive fluidity) and idealistic. It is also known that the introverted intuitives often suffer from mental problems such as social anxiety and ASD.

However, I still couldn’t account for half of the traits on the above list, so I turned to evolutionary biology. r/K selection seems to explain a lot: highly intelligent people have faster brain growth in infancy but grow more slowly in general. My two boys (both IN types) are both quite short for their age and their skeleton is almost two years behind the average.

What in our biology could make people grow more slowly? The answer is probably buried deep in our past: hunter-gatherers grew up more slowly than later farmers and herders who had more caloric intake at their disposal. They were highly egalitarian as they couldn’t accumulate wealth and that also made them highly defiant when facing hierarchical power structures (European colonialists never really could “domesticate” hunter-gatherers).
One by one those giftedness traits began to make sense: picking eating and being highly sensitive were probably more advantageous out in the wilderness than in a farming village. Hunter-gatherers (Ns in Myers-Briggs) are also more monogamous than herders (SP in Myers-Briggs), who have the earliest onset of puberty and the shortest life span among the different early modes of subsistence (the third being farmers or SJ in Myers-Briggs). It is, therefore, no big surprise that highly intelligent people do not accentuate their gender, whereas people who inherited their personality from herders or pastoralists do so to a high degree, i.e. sexual dimorphism is diminished in hunter-gatherers as well as gifted people. Hunter-gatherers are also quite playful into adulthood, as play is used to reduce conflict among them. Farmer personalities are more serious and business-like in contrast to hunter-gatherer personalities.
The final piece of the puzzle is trying to explain why hunter-gatherer personalities should be more intelligent than their farmer and herder counter-parts:

So, higher IQ might at the end of the day be nothing more than a protective mechanism! Just like social anxiety: if you are very open, you better have a defense shield in place! Introverted intuitives are already socially anxious by the time they go to kindergarten because they are aware they are different. By the time they are in their teens, they might be complete outcasts because they don't play power/alpha games and as they tend not to be violent they can become easy targets for bullying. The extraverted intuitives also are in danger of becoming outsiders and social phobics during their teens, unless they already have an established network with other hunter-gatherer minds.

In modern slang, we could say that gifted kids/high IQ people with a hunter-gatherer personality run on the updated operating system “Hunter-gatherer v2.0”. 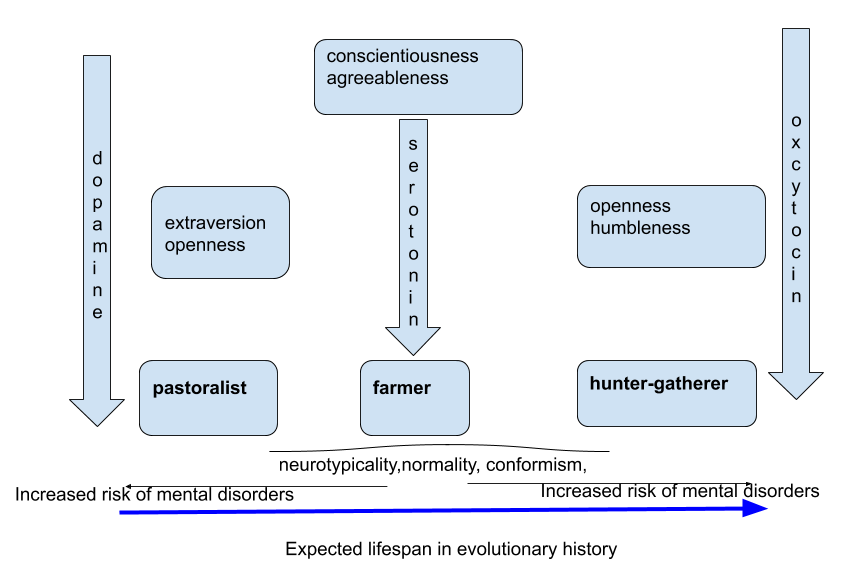