What the Myers-Briggs distribution of types really means

May 01, 2019
NB: this article is now outdated. It was an early draft of the hunter-gatherer hypothesis and contained too many speculative ideas.
I have come across a couple of explanations what the distribution of the Myers-Briggs types means. One common explanation is that you either belong to a common type (good thing, because it means you aren’t so different) or to a rare type (good thing, because you are something special). Somehow that logic doesn’t seem watertight to me, but in my experience, people often feel pride or relief when they learn about their MBTI.

However, that doesn’t really answer the question. The answer is very simple, though. The distribution of types represents their past reproductive success. 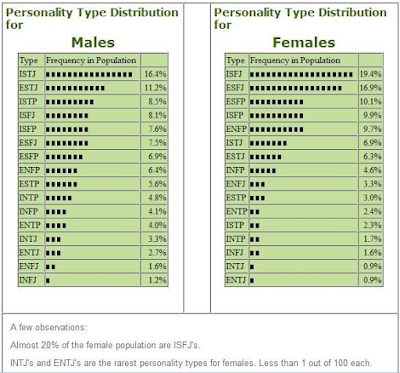 Looking at the below table is easy to see that there is a rough correlation between income (particularly STJ types) and reproductive success for men. However, that is true for sensors only. For intuitive men, the reverse is true: the ambitious N(T)J types have fewer offspring than the more “relaxed” NP types! 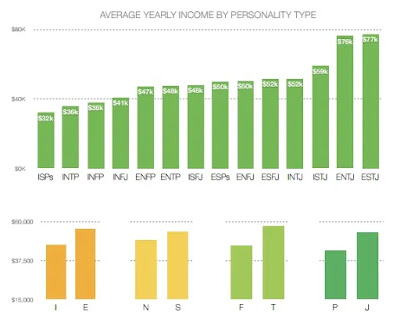 For women, you can interpret the type distribution chart the following way: the more “girly” a woman is the more children she has. This corresponds to the superficial image of women with which we are constantly bombarded by the media.

One thing that is immediately clear from the chart is that intuitives have fewer children. There are several reasons for this: